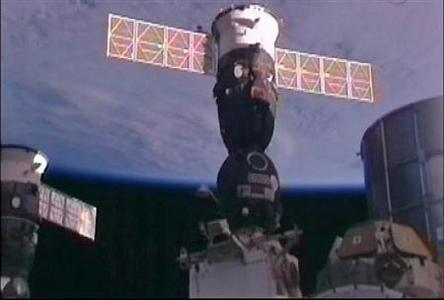 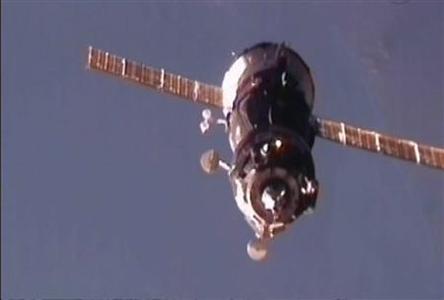 (Reuters) – A Russian Soyuz capsule arrived at the International Space Station on Friday with a trio of astronauts, bringing the orbital outpost back to full staffing after a failed cargo ship launch in August disrupted flight schedules.

Russian cosmonaut Oleg Kononenko, NASA’s Don Pettit and the European Space Agency’s Andre Kuipers blasted off from the Baikonur Cosmodrome in Kazakhstan on Wednesday for the space station, a $100 billion research complex that orbits about 240 miles above Earth.

Their two-day trip in the cramped capsule ended at 10:19 a.m. EST (1519 GMT) when the Soyuz slipped into the Earth-facing docking port on the station’s Rassvet module.

The docking occurred about three hours after another botched Russian launch, the fifth this year.

An unmanned Soyuz-2 rocket carrying a Russian communications satellite lifted off from Russia’s Plesetsk space center at 7:08 a.m. EST (1208 GMT), but failed to reach orbit after a third-stage engine failure.

The rocket and its payload crashed in Siberia, according to the Russian state news agency RIA Novosti.

There was no immediate word about whether the Soyuz-2 failure will impact upcoming launches, including a Soyuz flight slated for Wednesday to put six Globalstar mobile communications satellites into orbit.

The engine on the Soyuz-2 rocket lost Friday is different than the one used on the rocket that launches space station cargo and crews, NASA said.

“This is unlikely to have any effect on operations to the International Space Station,” said NASA spokesman Joshua Buck.

The next cargo run to the space station is scheduled for launch on January 25.

“There are problems,” Roscosmos chief Vladimir Popovkin said through a translator. “There is aging of many resources. We need to optimize everything. We need to modernize.”

“It’s also aging of human resources,” Popovkin said. “Given the troubles we had in the ’90s, quite a lot of people left and nobody came to replace them.”

Russian launch troubles kept the space station short-staffed for most of the past three months.

Crew flights to the station were delayed while Russian engineers scrambled to find and fix the cause of a Progress cargo ship engine failure on August 24. The engine is virtually identical to the one used on the Russian Soyuz capsules that ferry crew.

The accident was traced to contamination or a blockage in a fuel line.

Russia beefed up its inspection and quality control systems and resumed flying on October 30.

Russian launch failures this year also claimed a long-awaited mission to return samples from the Martian moon Phobos. The 13-ton Phobos-Grunt spacecraft is expected to re-enter Earth’s atmosphere between January 9 and 16.

The newly arrived crew at the space station joined station commander Dan Burbank and two cosmonauts, who have been aboard the outpost since November 16.

“It is so great to have all six crew members on board the space station,” said NASA’s head of human spaceflight Bill Gerstenmaier.

“This will be an exciting period for the crew. They have many activities over the next several months.”

With the return to a six-member crew, the station can resume full-time science operations, including medical research, physics experiments and astronomical observations.

The crew also will begin preparations for the arrival of the first commercial cargo ship.

Space Exploration Technologies, or SpaceX, is scheduled to launch its Falcon 9 rocket and Dragon capsule on February 7 for a trial run to the station.

The debut flight of a second U.S. supplier, Orbital Sciences Corp., is expected later in the year.

(Editing by Kevin Gray and Will Dunham)