German manufacturer PC-Aero has rolled out its new Elektra One, an electrically powered single-seater that was first announced in April 2010. Using lithium-polymer batteries, and a motor with 16 Kilowatt (21 horsepower) takeoff power, the Elektra One should be able to cruise at 86 knots and fly for three hours, said PC-Aero’s Calin Gologan. The brushless motor’s electronic controls let the pilot set the propeller for flight at a constant torque setting, in much the same way that conventional constant-speed propellers can be set for optimum climb and cruise power.

PC-Aero is apparently confident of the Elektra One’s future. “Our goal is to build a practical, carbon-neutral airplane that’s at the forefront of technology,” Gologan added. In addition to the green aspects of the airplane, PC-Aero is advancing the concept of a solar-powered hangar, designed by SolarWorld of Bonn, Germany. While in the hangar, the airplane’s batteries can be recharged by means of rooftop-mounted solar panels.

This summer the airplane will be entered in the NASA/CAFÉ-sponsored Green Flight Challenge in California. The winner of the competition stands to pick up a $1.5 million prize. 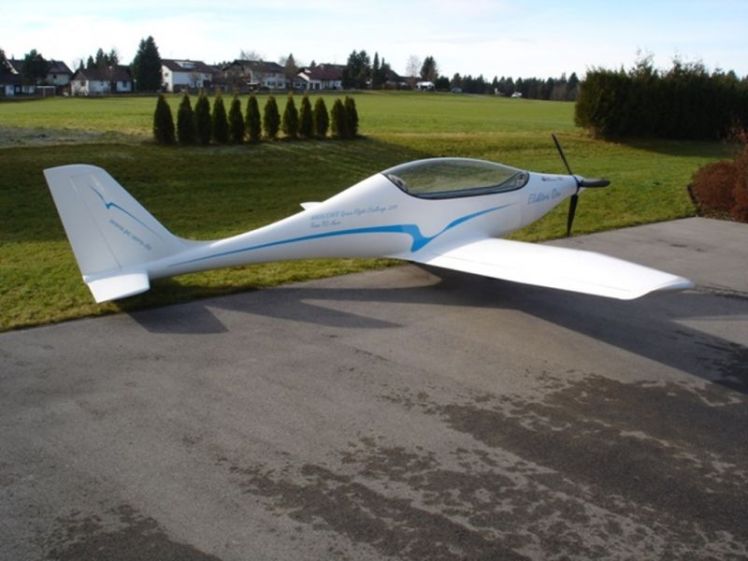 On November 22 we performed the Rollout of our Electric Airplane Elektra One with running engine. This event took place at the Rotortec company in Görisried/Germany. There we actually prepare the aircraft for the first flight.

On December 22 we performed successfully the static tests of Elektra One for the German Ultralight Certification. The structure of the aircraft (wing, fuselage and tails) was loaded up to limit load.

On November 22 we performed the Rollout of our Electric Airplane Elektra One with running engine. This event took place at the Rotortec company in Görisried/Germany. There we actually prepare the aircraft for the first flight.

The Future of Electric Vehicles

Calin Gologan speaks at the ID TechEx in USA

At the ID TechEx/Future of Electric Vehicles in San Jose/USA Calin Gologan speaks about:

From Leisure Aviation to commercial Application. The Future of Electric Transportation.

First Flight of Elektra One:

Calin Gologan (CEO PC-Aero) and the designer of the „Elektra One“ informs about his Electric powered Aircraft also about the E-Plane Family and the Green Village Airfield-Projekt.